18 July – 4 August 2017. I think that I am finally beginning to understand that the study guide instruction “make a painting/drawing” in this course is most likely not to be taken literally, but will include extensive preliminary investigation, theoretical and practical. After having completed my research on Marlene Dumas (Lacher-Bryk, 2017a), I decided that I would choose my collection of photographs (Fig. 1) from the past for my line painting using my selection of different inks as suggested by my tutor (Fig. 2). In order to become more familiar with large-scale painted sketching I started with smaller-scale preliminary work to be able to use a large format convincingly. I also kept in mind my tutor’s advice to pay attention to the quality my lines and work over the paintings until I am satisfied with the result (Lacher-Bryk, 2017b).

I did like the above results for their dynamics. Also I was very happy with being able to think up a variety of believable body postures without reference to anything but my mind. Still I realized that they lack the essential emotional quality I want to find in my finished line painting. I then had a look on the internet to find line paintings that show just this quality (Fig. 3).

With Baldova’s example in mind I chose some of my photos, which I believed held some real emotional potential and made some preliminary sketches to identify areas of light and dark (Fig. 4) and possible ways of translating those into dynamic line paintings.

After some difficult days digesting my not-so-brilliant POP results and some invaluable help provided by my fellow students I think that there might be light on the horizon regarding my sketchbook problem. I will be trying to pace my mind using a mind mapping technique. The first attempts were awkward and they felt hurried, not well contemplated, but after finishing each of them I noticed a certain calming down of my storming brain (Fig. 5). The greatest problem will be to make myself use the information gained, because usually new loads of images and impressions and ideas to work on swamp the efforts made.

Below there are my two attempts at producing two very different ink paintings with a main emphasis on emotional quality, the first to show intense communication between by sister and a black cat (Fig. 6) as well as the lost impression a great-uncle of mine used to leave (Fig. 7).

While I think that sister + cat was quite successful and I will definitely come back to painting something similar in the future, I am not so sure about my great-uncle. The particular hue of antique ink makes for a time lapse feel, but I was not successful in telling something with the lines I used. This was the first time during this exercise that I had an uneasy feeling about my choice of photos and choice of technique as being erratic. In order to sort myself out I switched tasks to making a background. I wanted to develop further one of the techniques I had discovered during Part 1, i.e. using several layers of paint including structured gloss medium and rubbing some of it off.
One of the goals I had set for myself for this exercise was a coherent account of both method and story development and I hoped to find a viable solution. Thus, first of all, I looked for other artists depicting weathered surfaces in painting and photography and found, on Saatchi onlione, a most impressive black and white image taken by Gregory Grim of what I guess is a bit of street leading to a shop, coming with a leaning door leaving indelible traces on the concrete over what I felt must have been decades (Fig. 8).

First I tested watercolour paper covered in gloss medium using coarse brushes, cling film and thick lines made with gloss medium as well as scratches and grooves made with the wooden end of a paintbrush. When more or less dry I covered this in a grey mix of gouache and partly removed the paint after waiting for it to dry (Fig. 9). While doing this I realized that what I was after was a method of having my photos embedded in a “pavement of memory”.

Since this worked better than expected I repeated the above, this time taking care not to produce a too dark first layer. On this I added a layer of placeholder “photos”, covered it in gloss medium and gouache again, added another photo layer, treating it in the same way, then added black, white and Persian red ink to increase the worn look (photo sequence in Fig. 10 and 11 below). 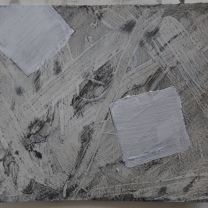 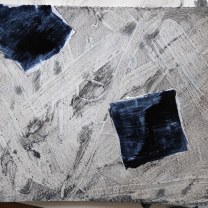 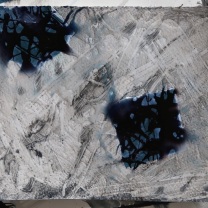 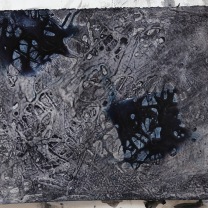 Although I was quite happy with some aspects of the resulting structure (which could well be a finished painting on its own), I knew then that I would not want such a heavy background, literally and figuratively. It would have to be lighter, both in colour and structure.

Since I felt stuck again, I resorted to making further mind maps to get the developmental process started again. I had a closer look at the aspects influencing my choice of photos and found out that I would want emotion to be a prime selection criterium (Fig. 12) and have them distributed in their respective layers in a semi-random way to reflect the workings of memory (Fig. 13). Then I looked at the possible painting techniques (Fig. 14) and options of layering (Fig. 15). The latter two showed me that my approach would become far too complicated with five layers, of which, in the end, not a lot would be visible. I felt then already that I would need to reduce the background to one well-designed photo layer.

Next I started with a series of small pencil and ink sketches in order to see how I might depict the relative emotions found in each of my selected photos. Since at the outset I had identified the strongest emotion in the image of my grandma, I started off with trying to transport a sad feeling at seeing her so feeble and removed from the world (decades of wrong medication had made her a quasi Alzheimer patient, which she would not have been if her doctors had taken the time to have a closer look at her). A line drawing by Djochkun Sami, found on Saatchi online, helped me start the experiment (Fig. 16).

Instantly, I noticed that my smallest paintbrush and ink would not allow me to create such fine detail and I started using gouache and acrylics to see whether I would be able to create a mix of line and tone, with very little success (Fig. 17). I was extremely happy about how the broom looked at an intermediate stage (Fig. 17b), but wanted to forget about the rest. The drawing/painting looked awkward, random and unhappy, not at all like the wonderful painting by Kayo Albert in Figure 18 below, which I had had in mind for the development of my sketch. 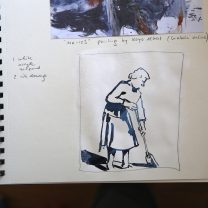 Figure 17. Sketchbook – a-c: painted grandma not developing well at all

I then had another attempt at making a memory sketch, this time using a gouache background, a first sketch with white waterproof ink (Fig. 19) worked over with Persian red, Sepia and black ink (Fig. 20, top), and covered in semi-transparent paper (Fig. 21). This paper I then covered in a layer of gloss medium, leaving only my grandma’s silouette uncovered, then painted over the dry gloss medium with grey gouache. This produced something like a fading effect, but the many different types of paint and techniques made for an awkward result. I started feeling both angry at my grandma for not cooperating :o) and also, interestingly and cruelly, a loss of emotion for her weak state back then.

When looking at Fig. 20 (bottom), however, I found that the horizontal lines surrounding my grandma’s non-existent body, were much more successful at depicting her state than all the other attempts. Also, the same day I took a photo of some interesting display dummies in a shop window (Fig. 22), whose bodies were wrapped in what I think will have been strings of LED lights and which gave me the idea to use horizontal lines not only for the surroundings but also for the persons as well.

The same instant I knew that I would have to change my approach. I looked through my photos again and chose the one with the new strongest emotion, which was, not surprisingly, my newborn son nearly 25 years ago. I made a quick line sketch in my sketchbook, found this exercise incredibly easy to do (Fig. 23) and made a new plan for the final painting (Fig. 24). Lesson to learn: never choose a subject with whose emotion I cannot totally identify.

All of a sudden the individual pieces I had been struggling with started to make sense. First I made another watercolour sketch, this time on A1 paper and a hesitant attempt at adding colour in a way similar to Kayo Albert’s style above. The latter I did to guide the viewer into the painting by emphasizing the area of greatest emotion and warmth (Fig. 25). 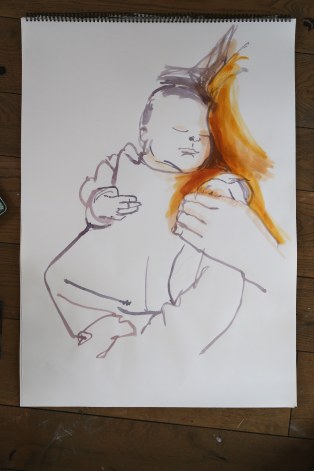 Next I prepared my background with the technique described above, taking care not to make it too dark. I added some deep grooves to increase the impression of a heavily used pavement (Fig. 26 and 27 below). 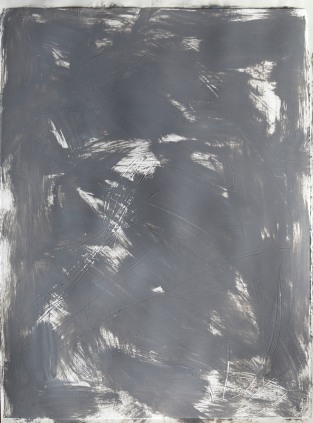 Next I selected the final photos I now wanted included in the final paintings, which were those past influences I felt were important to who my newborn son would eventually become. I arranged them all in one layer, taking care to place them where I felt their emotional connection to be strongest. The selected areas I covered in white acrylics, painted them with horzontal lines then added some highlights with white and Paynes’ grey acrylic (sequence of steps in Fig. 28 and detail in Fig. 29 below).

On this background I sketched in, with gouache, the outlines of my son’s body and me holding him. I noticed instantly that the careful preparation had helped me to produce coherence between background and line painting, although as this is a first attempt there is ample scope for improvement (Fig. 30).

Finally I added colour as intended in my first watercolour sketch above, using a mix of orange and red gouache (Fig. 31 and Fig. 32).

Looking back at a very intense two and a half weeks of planning and carrying out this exercise I can only marvel at the difference the introduction of mind mapping has made to the previously hopelessly erratic approach I had to most of the projects in my OCA courses to far. From now on, every time I feel stuck, undecided or overwhelmed with options,  I feel that mind mapping can make a real difference to my development. Many thanks again to my OCA fellow students, who drew my attention to this technique.

Regarding the outcome of the exercise above I feel that I discovered some key aspects about project planning and development and some important things I never knew about myself. I am also happy about the subject I chose and, despite the many inputs to consider, the appearance of the final painting.