13 July 2017. Taking a deep breath and getting back into course mode.

When looking at the works of artists using collections and my own preparatory photographs I find that am attracted more by regular patterns or those that allow me to focus on, then wander without getting confused or distracted, such as the giant wall created by Julian Walker (Fig. 1 below and Lacher-Bryk, 2017). I kept this aspect in mind when selecting from my collection of template photographs.

I am also attracted by unusual surfaces to paint on. In Painting 1 I produced a self-portrait with acrylics on aluminium foil (Lacher-Bryk, 2016) and was intrigued by the interplay between opaque and shine-through parts. I returned to aluminium foil, but used ink instead of acrylics this time, since my tutor had advised me to concentrate for the time being on investigating the properties of ink. I chose one of my soup cube images to start the series (Fig. 2). Although I thought all of the soup cube interactions worth investigating, I decided to stay with a grid and one that allowed to keep an eye on shadows, i.e. the last of the four.

In order to get acquainted with painting with inks on foil I went through a sketchbook serie of tests. Unfortunately it was nearly impossible to produce a truthful photo or scan of that page, but here it is anyway (Fig. 3).

There were quite a few attractive effects, especially where paint and ink tended to pull out of some areas but not others. I could not identify the reason for this behaviour, since I had taken great care not to touch the foil with my fingers. Maybe there were some minor differences in the physical properties of the foil, if only slight denting or similar. With the above results in mind I covered a piece of high quality A4 sketch paper in aluminium foil, taking care to produce a smooth surface without creases, then painted a section of my soup cube pattern using Plaka Gold (Fig. 4). My tutor had advised me to keep working quickly, so I tried not to spend too much time with this. Again the paint pulled out of some spots:

At this point I realized that these were no longer soup cubes but rather looked like flooded high-raise buildings. Since I love to grasp unexpected opportunities, I finished that painting adding reflections of sunlight on the roofs of the buildings, suggestions of windows as well as shadows on buildings and in the dark water (Fig. 6).

The above is no great work of art, but it contains a multitude of attractive aspects of both design and painting media I will with certainty come back to throughout the course. It also offers many technical options of how to proceed with investigating the shadows I am thinking of for my Assignment 2 piece. I am happy to have kept in mind my tutor’s advice of making colour a secondary property for the moment.

Next I went to choose some painting media from the list on p. 55 of the study guide (Open College of the Arts, 2015). Since I will always try and make life as hard as possible for myself, I decided to start experimenting with Coca Cola. A first attempt at using it straight from the bottle produced a very faint, though admittedly non-sticky mark. I then boiled some of it down as far as possible without burning it, then tried again. The resulting darker colour was nice to look at, but remained horribly sticky at every possible degree of dilution. I then had a look at the work of the artist mentioned in the study guide in connection with the use of Coca Cola, Marcel Dzama (*1974, Canada) (Zwirner, n.d.). I could not find any such paintings, but some using root beer. This most likely shares the stickiness, while Dzama did not share the secret. In order to find a solution for myself and at the same time see whether I could put the stickiness to some good use, I covered the painted patterns in crushed charcoal (Fig. 7). It would faithfully stick to where it was supposed to and after some experimenting with removing the loose bits I was able to create a pleasant irregularly faded look. I cannot say whether it is worth the effort to pursue further. 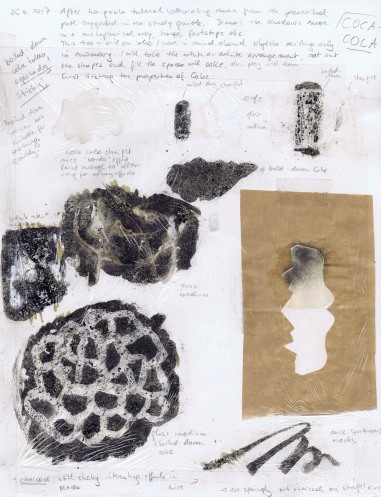 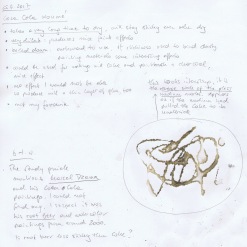 I then wanted to move on to other painting media, but my husband suggested to make caramel colour by deliberately and carefully burning sugar, and, since he was already in it, by boiling down beetroot juice. While the beetroot juice proved entirely non-sticky and produced a beautiful dark wine red hue, the caramel colour came out thick as treacle (which of course it may well be) and every bit as sticky as Coca Cola. In order to contain the stickiness, I placed the caramel on a bit of baking paper and folded it up. The resulting matt look I think quite attractive and probably very useful for my future shadow projects (Fig. 8).

14 July 2017. The next day both caramel and beetroot juice had thickened somewhat. I tested their new properties. The beetroot had turned sticky and a deep red colour, while covering the viscous caramel in baking paper allowed me to push it around under the paper (Fig. 9, top right corner).

This effect reminded me of the magic drawing board I used to play with as a kid, and so I made one to test my white on white collection on (Fig. 10 below). I found that my own board suffered from the same limitations as the commercial one, especially the accumulations of excess stuff in non-ideal places, thereby limiting the resolution of the image, but more so the slow flowing back into the original position. The drawings made are thus non-permanent and need to be preserved on photo.

Despite the limitations I decided to carry out one last experiment without the baking paper, pushing the caramel around with a palette knife (Fig. 11).

To me the resulting bear sketch looks energetic and somewhat fierce and I was quite happy with it. However, since I had discovered that covering the caramel with a thin layer of beetroot juice would result in a beautiful glow of the thinner caramel layers, I decided to try this technique on the bear. What had worked beautifully the day before, resulted in a disaster, because the beetroot juice had become too thick to flow quickly. It did flow, but took the caramel with it and destroyed the bear (Fig. 12, top). In order not to lose the idea completely, I added another layer of baking paper and painted bear and some other items from the collection on that with white ink (Fig. 12, bottom).

The result (Fig. 13) appears to me to be far less attractive than the original bear, but there is a certain floating impression, which I might be able to use later in the course.

Next in my series of tests I used my necklace collection and “painted” it using sand rescued years ago from our son’s sandpit and some blue deco sand I had been given by an aunt moving house. I prepared a background layer of sandpit sand, painted grooves with my finger and a palette knife and filled them with the coarse deco sand as quickly as possible. The result looks like something I might find as part of the summer decoration in a cheap jeweller’s shop window. Certainly needs a lot more practice and better quality sand plus a better selection of colours (Fig. 14).

And since it IS summer and the painting temporary, I let a wave destroy it (Fig. 15):

In order to test different backgrounds I next covered a carefully selected newspaper page containing an article on recruiting talents and thought it appropriate to combine this with one of my photos showing a selection of keys. I covered the newspaper page with gloss medium and painted on that using Senegal blue antique ink (Fig. 16):

It is nearly invisible on the above image, but I like the rough brushwork preserved in the dried gloss medium, which is heightened by the ink. Painting the keys was a somewhat awkward affair, because the same grooves left by the brush used in spreading the gloss medium caused the lines to thicken. Also, in order to produce a working painting I would need to think carefully about where to place my objects in relation to the newspaper text and photos. As it is, background and foreground get in each other’s way in places. The bit working best in my opinion is slightly above and left of the centre. I am intrigued by the possibilities this technique may offer for my own shadow project and may come back to it when starting to work on Assignment 2.

And finally, to demonstrate that I will do anything to discover new techniques, an excursion into the joys of experimenting with a sheet of Nori alga :o). I love the dark green of this Sushi ingredient and thought that with a little background knowledge I would be able to paint on it by bleaching. I tried boiling it, adding lemon juice, vinegar, citric acid, white spirit and even chlorine bleach. In most cases the effect was zero, bleach and boiling caused the sheet to disintegrate but the pigment was not impressed Other than my T-Shirt, which promptly succumbed to a droplet of bleach, it remained as it was, a beautiful dark green. I gave up and painted a few lines with acrylic paint on the intact sheet (Fig. 17). This caused no problems, but had no effect I could not have achieved using more conventional means. I am thus looking forward to the beautiful Sushi the remainder of the sheet will eventually turn into.

I think that I am getting better at identifying new painting media and observing  possibilities they may offer as a means of expressing myself. Also, I am less likely to give up on a superficially failed experiment, because I have more knowledge now regarding adapting techniques. However, a central area I will need to work on is the systematic inclusion of discoveries made into the planning of projects. I still find myself working intuitively, which results in “discovering” the same things over and over, which is not just annoying but highly unprofessional. Hopefully I will be able to find a working solution over the summer holidays.